One of America's first "all-metal" Air and Ground Attack Fighters, The Curtiss P-40 "Warhawk" was first deployed by The US Army Air Corps. in 1938. Over 13,000 were produced. The "Warhawk" was one of the most successful early World War II Fighters used by America and her Allies. A robust and highly maneuverable Fighter, The "Warhawk" was a single seat Aircraft that was 32-feet long, with a 38-foot wingspan. They featured  a wider than normal wingspan (which was an asset in ariel combat). Powered by a Allison V-12 Engine, The "Warhawk" could achieve an airspeed of 360-mph. The operational ceiling was 30,000-feet.

Armament included (6) .50 Caliber Machine Guns, mounted in it's wings. Each Gun carried 235-rounds. Additionally, The "Warhawk" could carry 250 to 1,000-pounds of both Bombs or Torpedoes. These could be mounted under it's wings or fusilage. The "Warhawk" made History with The American Volunteer Group, who volunteered to fight The Japanese Invasion of The Republic of China from 1939 to 1941. The AGAR identified their P-40s by painting a Red Mouth with White "Tiger Teeth", underneath their engine cowls. Additionally, a pair of "Eyes" were added, giving them the moniker of "The Flying Tigers". The Japanese Attack on Pearl Harbor yielded the destruction of a Squadron of P-40s, at Hickham Field in December of 1941. Amazingly, two "Warhawks" were able to get airborne. They inflicted heavy damage to The Japanese "2nd Wave".

Numbers of P-40s were sent to Europe during World War II. The moniker was changed to both "Tomahawk" and "Kittyhawk". They flew with distinction in North Africa. Although "replaced" to some degree by more "advanced" Fighters, The P-40 would see extended use during The War. The last "Warhawk" was retired from the Honduran Air Force in 1958. 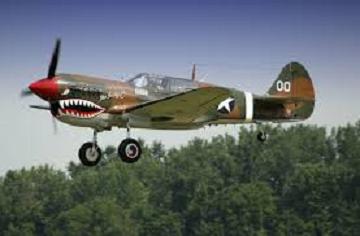