With America' late entry into The War, no viable fighters made in America, were deployed to Europe. The Curtis JN-4 was originally designed to be the Fighter deployed had The War went on. Developed in 1918, The "Jenny" (as she was nicknamed), became a primary Training plane for both The US Army and Navy (with some modifications for them). A twin-seater, it was a 27 foot long Bi-plane with a 44 foot wingspan. Capable of airspeeds up to 70 mph, The "Jenny" was also used by The Royal Canadian Air Force as a trainer as well. Some 6,000 were produced. After The War, with aviation technology constantly advancing, most of the planes were sold off to the civilian market. The "Jenny" was actually responsible for the growth of America's commercial aviation and enjoyed an even longer life in the Agricultural industry as an air platform for the spraying of pesticides over farms (Cropdusters) - well into the 1930s. 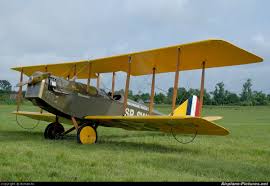