US Curtis A12 ''Shrike'' Fighter Plane

The Curtis A-12 “Shrike” was only the second such “Monoplane” designed and deployed with The US Army Air Corps. A staple of The US Air Combat inventory, The A-12 was first produced and deployed in 1933. They would remain the primary Fighter Plane of America until 1942. As a result of The “Washington Treaty” with Imperial Japan, many current and pending US Ships and other War weapons were either scrapped or redesigned to fit into the parameters of The Treaty. The A-12 was limited to 48 production Models. Most of these were deployed to Wheeler Air Field in Oahu, Hawaii Territory by 1938-1940. A 2-Crewed Fighter, The Curtis A-12 was 32-feet long with a wingspan of 44-feet. It was powered by a Wright Cyclone 9-Cylinder Engine, capable of airspeeds of 177-mps. It had an operational ceiling of 15,000-feet. The A-12 was armed with (4) 7.62mm Machine Guns and an additional .30 Caliber Machine Gun installment. They could be configured to carry either (4) 125-pound Bombs or (10) 30-pound fragmentation devices for Air to Ground Combat.

The majority of The A-12s deployed to The Pacific were destroyed on December 7, 1941 – when Imperial Japan attacked The US Naval Base at Pearl Harbor (many of which never got off the ground to engage The Japanese Air Force). The advent of faster and better Aircraft saw The A-12 removed from further production. A few survivors were sold to China to serve in it’s fledgling Air Force. 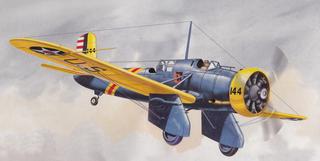