With only (1) version created as a prototype (1954), The Convair XFY ''Pogo'' was part of The US Military experiments with vertical take off or lift aircraft types. The Convair Aircraft Company fielded The ''Pogo'' for use. The name came from the aircraft ability to lift up and lower down, as with the Child toy known as The Pogo Stick. Launching was from a vertical position, by which the aircraft rested on a modified tri-tail (rear). A powerful set of twin, counter rotation propellers (front Nose), could produce 5,000-HP. The ''Pogo'' was seen as a viable fighter for US Naval assets such as Aircraft Carriers. Their size would allow for double the amount of a normal fighter deployment. Piloted by one, The ''Pogo'' was 32-feet long with a wingspan of 28-feet. It weighed 11,000-pounds and used a single Allison Turboprop Engine. The ''Pogo'' could achieve 475-mph and was rated with an operational ceiling of 38,000-feet. The ''Pogo'' could be fitted with (4) 20mm Cannon or (48) 3.75mm Rockets. The aircraft was passed on by The US Military due to landing issues which put too much stress on the Pilot. The only prototype is currently Museum kept. 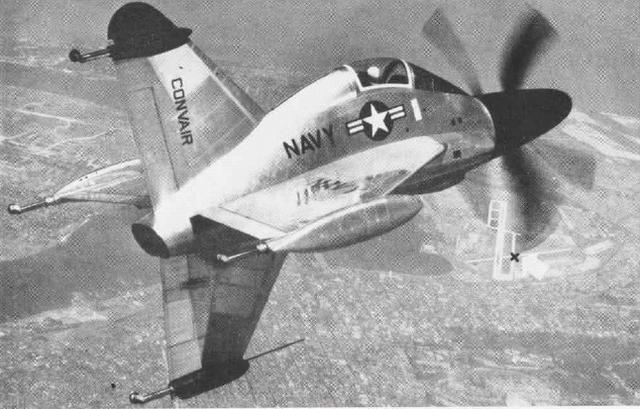