Developed in 1941, but not officially introduced into America’s War Inventory until 1944, The Consolidated TBY “Sea Wolf” was a Medium Torpedo Bomber. Only 180 were produced for The US Navy in World War II. Featuring a long Canopy (for overall maximum observations), The “Sea Wolf” was crewed by 3 (unique for combat). It was 40-feet long with a wingspan of 60-feet. The Bomber was equipped with a single Pratt-Whitney Radial Engine, capable of 2,000-HP. The “Sea Wolf” could achieve over 300-mph and had an operational ceiling of 27,000-feet. Her armament was (4) .50 Caliber Machine Guns, deployed throughout the fuselage. An additional .30 Caliber Machine Gun was also installed (making he a formidable Fighter and well able to defend Herself). The Torpedo aspect of The “Sea Wolf” allowed for the deployment of (1) Surface Torpedo or up to 2000-pounds of conventional explosives. Featuring Radar, The “Sea Wolf” was considered expensive which was a main reason that much of her production was slowed during The War. The majority of them were used as Trainers in The Navy for Torpedo Bombing. With the end of The War (and impending “Jet Age”) – The TBY “Sea Wolf” was discontinued. 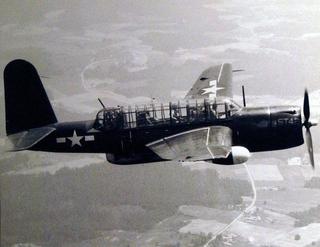