US Consolidated B32 ''Dominator'' Heavy Bomber

The last American Bomber Class to be deployed to Europe at the end of World War II. The “Dominator” was developed should problems develop with the already deployed B-29 “Superfortress” Heavy Bomber. Very few numbers were deployed to The Pacific Theater (mid 1945). Crewed by (10), The B-32 was 80-feet long. It featured a 135-foot wingspan. They were powered by (4) 18-cylinder Radial Engines. The “Dominator” could achieve 435-mph and had an operational ceiling of 31,000-feet. It could carry 20,000-pounds of Ordnance, supported by (10) 12.7mm Machine Guns located throughout the Fuselage. Only 118 were ever produced. No examples (other that incomplete component parts) have survived. 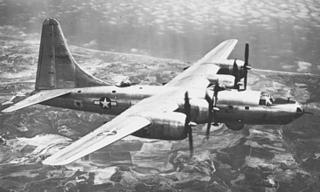