One of the few ''Large Frame'', .45 Caliber Revolvers produced for use with The US Military, The Colt ''New Service'' Revolver was first fielded in 1898 and would remain in inventory until 1941. A .455 Caliber Version was manufactured for use in The British Army (in small numbers). The Gun was also a popular ''Gangster'' weapon favored for it's ability to penetrate automobile frames and early steel body armor. As such, many US Law Enforcement Agencies likewise adopted The ''New Service'' Model for use. Models could still be found in limited usage as late as The Vietnam War (1960s).

A 6-round capacity, The ''New Model'' weighed 1-pound and had fixed sights. A Double-Action weapon, it had a maximum effective range of 75-yards. It could also chamber the .38 Caliber round (but this was often found to be too ''light'' for combat usage). 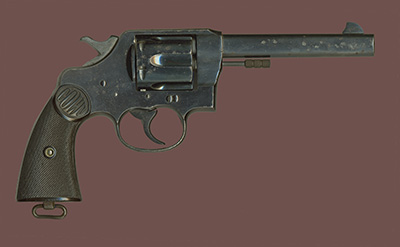