The “Potato Digger”, The Model 1895 Machine Gun was the first successful gas-operated Machine Weapon to be used by US Armed Forces. The feeding mechanism was similar to the digging implement used to extract potatoes from the ground (hence it's odd nickname). As a .44 cal round was designed for the weapons system, The Model 1895 had an impressive cyclic rate of 450 rounds per minute. Mounted on a “wooden” Tripod System, The Model 1895 was also very light – at 17-pounds. It had an equally impressive 1,200 yard effective range. Used with great frequency in The Spanish-American War – The Model 1895 saw some early service in World War One as well. 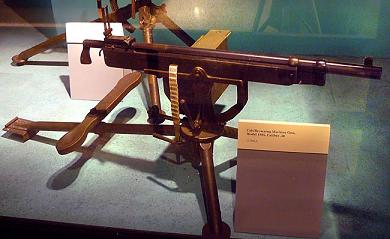