Known as "The Peacemaker", the Colt Model 1872 was a staple of The American West. Originally developed for The US Cavalry (with 8,000 production  Models made), it gradually became a standard weapon of many American Lawmen (and Outlaws). Designed initially as a single-action firing weapon, it wad chambered for the .45 caliber round (brass cartridge with lead shot). Weighing just 2 pounds, it was 13 inches overall. Designed to chamber 6-shots, the Model 1872 had a 150 yard maximum effective range. Later versions (1878), were designed to be the more efficient double-action, .44-40 cal. Still, "The Peacemaker" fir it's relatively short life us often memorialized as the legendary gun that brought law and order to the "wild" West. 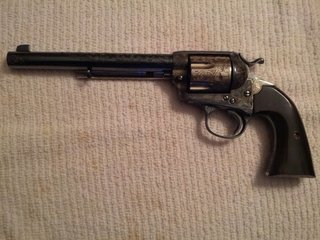