US Colt .31 Caliber ''Side Hammer'' Revolver

The unique “Pocket Revolver” known as The “Sidehammer”, was manufactured by The Colt Firearms Company in 1855. Also known as The “Root” (after designer/inventor of the weapon, Elisha Root), it was a popular Cap and Ball Revolver during the early years of The American Civil War. Manufactured in both .28 and .31 Caliber versions, it was unique in it’s “Spur Trigger” design. This was designed to make the pulling of the Hammer easier. The SIdehammer also featured a “Hidden Trigger”. Accurate to 25-yards, The Sidehammer weighed only 17-onces and was a total of 8-inches long. Used as a “Hideaway”, many were purchased by Soldiers of both Union and Confederate Armies as a Personal defense weapon. Over 40,000 were produced and although production stopped in 1870, many were still carried by US Cavalrymen during The Indian Wars. 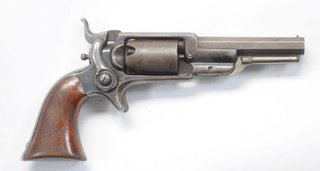