Developed for issuance by The US Navy – for award to not only those Personnel – but those of The Marine Corps. and Coast Guard, who participated in Military Operations between 1937 and 1957. Overall operations were most seen during American Support of Chinese Nationals in their War against The Imperial Japanese Military Forces. Both Land and Water Operations were qualifying factors. Each Operation (however long) was considered a qualifying factor. Many Naval, Marine and Coast Guard Servicemen (including Officers), were awarded The China Service Medal, with the last given in 1957.

The Medal is a circular Device, Gold in tone, upon which is engraved on it's Front – a stylized Chinese ''Junk'' Ship, Surrounding this image are the words ''CHINA SERVICE” in ''Asiatic Font''. Nothing was placed on the Rear (which was left open for personal Service information. Some versions featured the Service Identifier as well. The Ribbon was a ''Chinese Yellow'' upon which was placed a single Red Stripe on both ends. 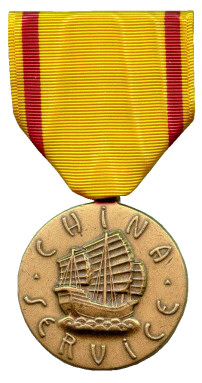