US Cessna A37 ''Dragonfly'' Attack Plane

Originally designed by The Cessna Company, a leading provider of Private Aircraft, they were approached by The US Air Force to develop a high endurance, maximum payload Aircraft for close ground support. The Cessna Company had designed a Flight Trainer which had some small level of success. Redeveloping their design, they manufactured The A-37, known as The “Dragonfly”. The A-37 featured larger and heavier fuel external fuel pods and a heavier frame. It was 30-feet long with a 30-foot wingspan. The “Dragonfly” was powered by Twin GET J85 Turbo Jets and each Engine could achieve 2,700 pounds of thrust. It could achieve over 500-mph and reach an operational ceiling of 41,000.

Crewed by 1 or 2 crewmen , The A-37 carried formidable armament. A 1,500-round Nose Mounted 7.62mm Min-Gun with an additional Mini-Gun mounted underneath it’s fusilage. It also carried 30mm Wing Cannon. The “Dragonfly” could also carry multiple Rocket Systems, including AIM-9 “Sidewinder” Missiles or 2.75mm Rockets. She could be reconfigured to carry either 509-pound standard Ordnance or Napalm Compound Explosive. The A-37 would remain in Air Force Inventory into 1990 (mostly with The Air National Guard). It was popular with many South American Airlines Forces and other Allied Countries well into the turn of The 20th Century, with some variants still flying. 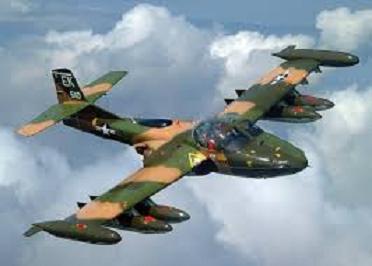