Although the use of US soldiers as a mounted force goes back to The American Revolution, Cavalry as a viable military force came into age during The American Civil War. Although experimentation with mounted troops were attempted (with varying degrees of success), in the Early Indian Wars (1790s to 1850s), and The Mexican-American War (mid-1840s) – these were mostly Dragoons. Seen as “mounted infantry”, they did serve an important function. However, the need for an organized and rapid deployment force (as seen by American observers during The Crimean War), would soon be put to test. The American Civil War was the testing ground for these light and tactical Units.

The lessons learned in The War were put to good use (more or less), during The Plains Indian Wars. Still, The Plains Indians (which composed of a half-dozen Tribes of Native Americans which called The Northern and Southern Plains of The West their home), were some of the best light cavalrymen in The World. Skilled from a young age in “the way of the horse”, - they were a constant (and deadly) challenge to the American Cavalryman.The average “Cavalryman” was around 18 years old. He had no formal training prior to his military service. Most often, all young men had a working knowledge of horsemanship (as this the the primary form of transportation until the advent of the automobile). Still, some young men from an Urban background had no idea of horsemanship. Enlisting in The Army often meant being “assigned” to whichever Branch was in dire need of recruits. This more often meant The Cavalry. The basic Cavalryman had up to 4 weeks to “master” basic horsemanship, firearms use, riding in formation and being able to form (sometimes complex) military movements (often under duress). These “green recruits” were often fodder for the better trained and more “focused” Native American. Equipped with the “current issue” of rifle or carbine (Sharps, Spencer etc.), the recruit also had to master the pistol or revolver and the tried and trusted “traditional weapon” of The Cavalry – The Sabre.

The recruit also had to master the proper carrying of the up to 45 pounds of gear (heavy issue). Still using the heavy and uncomfortable wool uniforms of The Civil War, many Troopers began to slightly modify the same for the rigors of the sun (and heat) of The Plains. Many a young recruit simply did not survive his service. From being killed in actions (directly or from wounds received), poorly prepared food (in the field) – which lead to health issues, extremely difficult weather conditions, a Cavalryman's life on The Plains was not conductive to a “long life”. After The American Civil War, an influx of freed (and unemployed) African-Americans flooded the position of Cavalrymen. Dedicated and used to hardships, these recruits often proved better to the “Spartan lifestyle”. Used more and more throughout the 1870s onward, these soldiers earned a somewhat unsual name from their Native American enemies - “The Buffalo Soldiers”.

So named (as far as the Native American perspective), these men resembled the vaunted life-giving source of The Plains Indian – The American Buffalo. The name would “stick” (with some honor for these men) and still a source of “ridicule” for White Troopers. The name today represents a group of brave and daring men who DID survive the rigors (and dangers of), The American Plains. 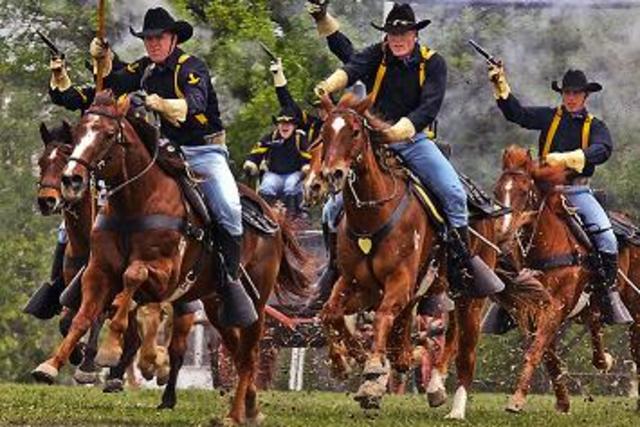