The ''Cannon'' – Class of US Navy Destroyers, were specially built Warships used for Convoy and Anti-Submarine duties in The North Atlantic Campaigns of World War II. (70) such Vessels were built and deployed. The primary Mission of The Destroyers was to protect War Material and Troops Movements from both The United States Eastern Seaboard and Canada – to Europe (specifically England, Ireland and later France in 1944). Effective and reliable for ''Cold Weather'' Warfare – The ''Cannon'' – Class would serve until 1945, when the bulk of the surviving Ships would be sold to various Allied Nations. The last such ''Cannon'' is still in service with The Royal Thai Navy. Displacing 1,300-tons, The Class was 300-feet in length with a Beam of 40-feet. Powered by (4) Diesel Engines, They could achieve a speed of 40-mph. They typically crewed around 220 Officers and Men. Armament included – (3) 3-inch Guns, (2) 40mm AA Guns, (8) 20mm AA Guns, (3) 21-inch Torpedoes, (8) Depth Charges (various) and (1) AS Mortar Launcher. 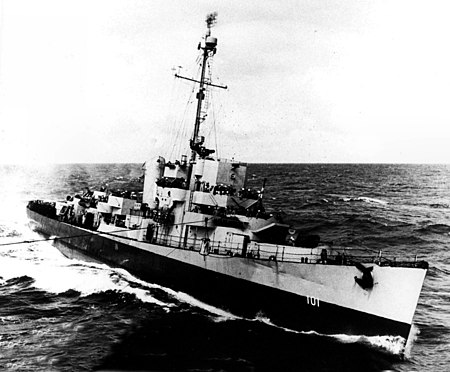