The vaunted Bell AH-1 Attack Helicopter, was manufactured by Bell Helicopters and first deployed during The Vietnam War in 1967. Based on the success of it’s Utility Helicopter, The “Iroquois” (“Huey”), the need for a dedicated close ground support Helicopter was of great importance. Several variants of The UH-1 had been “converted” by area Field Commanders into makeshift Gunships (with some success). The development of the nicknamed “Cobra” (also The “Snake”), was Bell’s offering to The US Army. The AH-1 was a twin Main Blade, twin Tail Rotor Helicopter. It was 50-feet long with a 45-foot blade radius. The “Cobra” 13-feet talk from it’s skids. Crewed by 2, it was powered by a Lycoming T53 Turbo Shaft Engine. The “Cobra” could achieve 190-mph. They could achieve 1 , 200-feet per second and featured an operational ceiling of 11,400-feet. The “Cobra” could range 350-miles.

The AH-1 “Cobra” was armed with a robust weapons package. Featuring an under fusilage/cockpit Turret Pod, thus gave the Pilot the ability to traverse weapons 180-degrees. The Turret supported twin 7.62mm Mini-Guns. The “Cobra” also featured (14) 2.75-inch Rockets mounted in Pods on each side of the fusilage, on “Wing” extensions. The Helicopter also mounted a 40mm Grenade Launcher. Noted for the “time honored ” Military practice of “Nose Art”, The “Cobra” nose was often painted in a “Shark-like Teeth” motif. This added the visual “lethality” that The “Cobra” projected in flight.

Highly effective as a ground support weapon, The AH-1 would continue throughout The Vietnam War. So successful, it was maintained in The US Military Arsenal since. Although there are 13 variants which modernized The “Cobra ”, the Helicopter is used by many other Foreign Nations today as well. 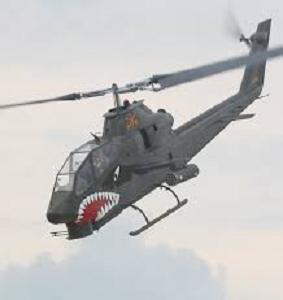