Also known as The ''Mousrtrap'' Rocket, The ASW Mark 20 (and subsequent Mark 22), was a replacement for the previously discussed ''Hedgehog Rocket (Barrage)'' System. Developed in 1941 for use by The US Navy and US Coast Guard Services, The ASW was a ''Rocket'' propelled weapon. Deployed via a Deck rail launching system, it was used to attack Submarines wither surfaced or only several feet below surface/ It was an excellent Harbor (low draught) weapon and not for deep sea usage.

Typically a 7.5-inch projectile, ''Mousetrap'' weighed 65-pounds (with a 22-pound warhead). They were launched in groupings of (4) – thus increasing their overall damage to a Submarine Hull. Destroyers and ''Sub Chasers'' were two common Warships that deployed them. 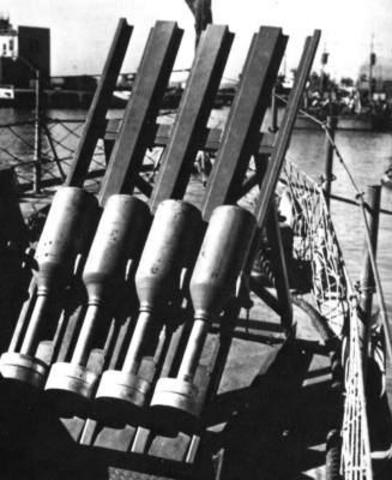