US AS Projector ''Hedgehog''

The US Navy Anti-Submarine Projector, nicknamed The "Hedgehog", was a Ship mounted, forward projecting, Anti-Submarine weapon. Originally developed by The British Royal Navy in 1942, the Device was a spring/hydraulic platform - built into various types of Surface Combat Ships. Each "Hedgehog" carried 24 Spigot Mines. These explosives were cylindrical containers, connected to a bar stabilizer. Each charge carried 35-pounds of TNT. The launch distance from the platform to the Sea was between 5 and 8 yards. The "Hedgehog" was typically installed on the Bow (Bow) or Stern (Rear) of a Vessel (although "side mounted" platforms were used as well. Upon Sonar Contact with an Enemy Submarine, The "Hedgehog" would fire it's Rounds in clusters. The clusters would hit the water and descend to a maximum depth of 200-feet. The Spigot Explosive could be preset to detonate or could explode on contact. The "Hedgehog" saw extensive use in both The North Atlantic and Pacific Theaters of World War II. Variations are still used by many Navies throughout The World. 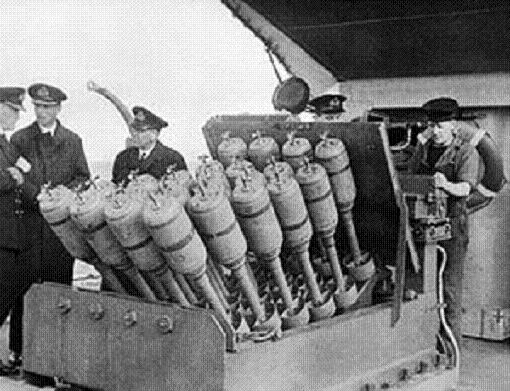