While most would assign duty of Naval Operations to A Naval Force, for a period of time in The American Armed Forces, The Army was the paramount Force which protected the majority of The United States Coastline (even over The US Coast Guard). As we have seen, The US Coastal Artillery Corps. manned hundreds of Forts and Islands, each heavily fortified by Troops and Artillery Batteries. This deployment would continued well into the mid-1940s, before the advent of Missile Systems and Strategic Bombers would replace and disband them. An off shoot Detachment of The Coastal Artillery was The Submarine Defense Corps.

The primary duty of The Corps. was to deploy and maintain a variety of below (water) surface explosives (mines). Placed as varying depths throughout a Harbor or Port, they were to hamper or disable any Enemy Submarine which may attack (or conduct espionage). The Corps. also maintained a number of small Vessels to accomplish this goal (as well as general Patrol). The Corps. was also disbanded, when it's parent Unit – The Coastal Artillery was.

Their Flag, which was similar to The Coastal Artillery – was an Orange Field in it's entirety. Centered, were twin crossed 19th Century Cannon Barrels. Superimposed on The Barrels was a Blue Harbor Mine. The words ''SUBMARINE DEFENSE'' appeared in banner form over the top and bottom of The Barrels. 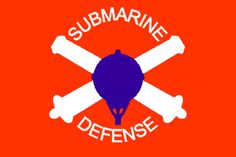