US Army Order of The Spur

The ''Order of The Spur'' is an American Army Tradition which was established by The US Cavalry Branch. The actual awarding of Riding Spurs to a Trooper (Mounted Soldier), was the end result. The Tradition developed from New Recruits to The Cavalry Branch. Often, new soldiers had little or no experience with riding a horse (let alone control one in battle). To identify such, the horse of the new soldier had it's tail shaven (earning the soldier the Title of ''Shave Tail'' – or rookie). Only after extensive training in riding and care for His horse, was a soldier called ''Trooper'' – and awarded His ''Spurs'' (which were Military grade as opposed to those used in training).

Today, the Tradition still exists – sans Horses. Armored (Tank) and Helicopter Units (both of which claim the title of ''Cavalry'' today) – award ''The Spurs'' (ceremoniously) to Troopers who have served in combat for a period of time with their Unit. If no active combat experience is used as the awarding criteria, many Units have a series of special skills courses which a Trooper must complete. These are based on His or Her knowledge and physical fitness qualifiers. The ''ancient tradition'' of reciting the Cavalry re-themed poem ''Fiddler's Green'' (1856), is still a requirement for all. A formal awards ceremony is held, after which The Trooper is awarded Silver Spurs (Gold for Master Earners). In addition, it is during this ceremony that a US Cavalry Trooper is likewise awarded His or Her Cavalry Stetson (Hat), which is still worn with both Dress and Fatigue Duty Units. 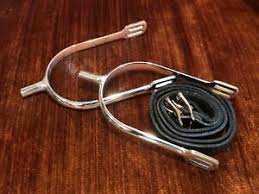