US Army Order of St. Maurice

The US Army Order of St. Maurice, is a non-Official Award Medal issued for acceptance into The Order. The initial Military Occupational Skill of Infantryman must have been achieved in order to be considered for Award. Normally, The Order is reserved for either Senior Non-Commissioned Officers or Generals. However, Spouses of Infantrymen who have contributed to fostering the History of The US Infantry and other contributing factors can also be accepted into the Order and issued The Award. There is no official Ribbon and wear with the Class ''A'' Service Uniform in general wear is not permitted. In Service Member considerations, Infantrymen who have seen to the care of Civilians in combat, under extreme dire conditions are often awarded The Order for their heroism and determination. Although a US Army ''Award'', The Order is and had been bestowed to Marines and Foreign Allied Forces for similar work while seconded to the US Army Infantry.

Named for The Christian Saint Maurice, who as a 3rd Century AD Roman Centurion, refused to slaughter innocents under orders of Rome – and thus earning His and His Legions own death, there are (5) Levels awarded. They are ''Civis, Peregrinus, Legionnaire, Centurion and the highest Level – Primicerius'', the neck ribbon is of Light Blue and Gold (the colors of The US Infantry). The Medal bears the engraving of St. Maurice, defending an innocent Charge. 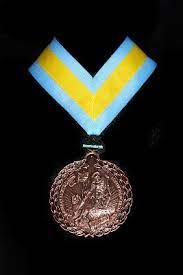