The basic Uniform of The US Army had changed greatly since it’s initial inception in 1780. The basic Colors scheme was Dark Blue  (sometimes referred to as “Midnight” or “Federal” Blue). By the 1880s, Texas Army yet again redesigned it appearance again. Prior to thus Period, The Dress Uniform consisted of an “extended” Frock Coat with “Kersey” (or Light Blue) Trousers. The use of The Shako Hat, Hardee and Stetson Campaign Hat – all served as Headgear. The Uniform devised during The Plains Indian Wars was once again based on a Federal Blue coloring with an extended front and back. “Twilight” Blue was chosen for Trousers color. They also included Yellow, Red or Gold Stripes for the legs, for Branch affiliation or General Officer status.

Although the standard leather belt was being phased out, a 3-Inch wide Black Belt was used as an Outer component. The recent use of The “Eagle Belt Buckle” (formerly reserved for Officers), was now standard issue. Coats featured a single row of Brass Buttons, with Rank being identified by Gold Stripes for NCOs and Cloth Shoulder “Boards” with sewn Rank for Officers. Most NCOs however, still kept to their old Civil War “cloth” Stripes of a brighter and contrasting color.

The final piece was the previously discussed Dress Helmet. As stated, most Solders still retained their Kepi’s. Many Dress Uniforms also featured Aiguillettes. These were often European influence answer were worn on the front of The Coat. Used for Staff Officers, some Cavalry Regiments adopted them for Color Guards and NCO’s. Footwear was still a pattern of The Jefferson Shoe or Calf Boots.

Thus Dress Uniform would be the last “Blue” Uniform issued. Lasting until the beginning of the 20th Century, The US Army, as gad mist European Armies, began to phase out “colorful” Uniforms in lieu of the “Earthen” Colors necessary for survival on the “Modern” battlefield. Ironically, The US Army would resurrect The ‘Blues” yet again after 80-odd years as it’s current Dress Uniform  (albeit greatly different from it’s 1880s predecessor). 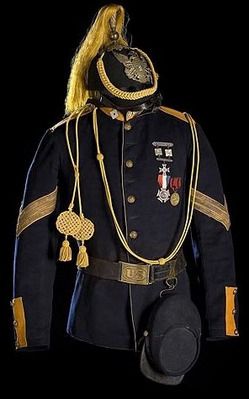