The United States Army Medical Department was created by Act of Congress in 1775. The “Army Hospital” Service was established to provide care to Continental Soldiers during The American Revolutionary War. It was headed by The “Director, Chief Physician” of The Army. When created by Congress, it was to be a Provisional Corps. Only to be activated during “times of War”.

In 1818, Congress re-created The “Medical Corps.” Of The US Army as a standing organization of continual status. Renamed The Army Medical Service in 1917, it has provided Doctors, Nurses and Field Medics to The Service in Peace and in War.

The Medical Corps. “colors” were originally Green. Male Medical Staff were identified only by a Green Arm Band Stripe, worn over the outermost Uniform Garment. Initially, they had no Flag or Banner. It was during The American Civil War of 1861-1865 that Yellow Flags with a Green Letter “H” were used to identify Medical Services in The Field.

Although The Corps. Had used the traditional Medical Insignia of The Greek Caduceus (since 1851), this was changed when The Corps. Was given Official Colors in the 20th Century. The basic color was changed from Green to Brown.

The Regimental Department Colors, which are flown at all Battalion, Regimental and Division levels, is a Brown Field in entirety. A full colored Federal Eagle is place prominently in the Center. A Crest (on The Chest of The Eagle), reflects a part Colonial Era Flag of The United States and part Caduceus (in White and Green). The Eagle holds the Banner Scroll in it’s mouth which carries the motto of The Medical Corps (in Latin) which reads “Experientia Et Progressus” or “Experience and Progress”. A lover Banner Scroll at the bottom of The Colors reads “Army Medical Department Regiment”.

In the 21st Century, with The US Army re-adopting Uniform colors to honor it’s heritage as The Union Army during The American Civil War of the 19th Century (Blues), it also began to re-adopt the 19th Century style of Regimental Colors. Although background or field colors change with Branch of assignment, all now feature The Federal Eagle. 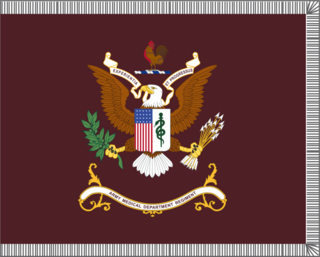