The 1st Special Forces Operational Detachment (aka “The Unit” or ''Delta Force''), was founded in great secrecy in 1977. It’s components were taken from The US Army Special Forces and Ranger Regiments. They were created to deal with problems seen during The Berlin Olympics of 1972 and The Hostage Crisis at Entebbe (Uganda). It was determined that a specialized Force to deal with the then growing Terrorist Factions in The World. “Delta” would become the prototype for all future Counter-Terrorism Units with The US Military and other Countries as well.

In The 1980, an Operational Detachment of The US Navy SEALs were assigned to Delta Force, and handle seaborne Terrorism Missions. Although a US Army Unit, Delta also recruits it’s Candidates from The Navy and Marine Corps. as well. These Military Personnel are placed on temporary duty status with The Army while serving in Delta. Selection is also not also based on a strict Infantry or Special Operations background. However, all Candidates must be or be willing to be qualified a Military Parachutists.

Training is 6-months in during, with Bases “said” to be at both Fort. Benning, Georgia and Fort. Bragg, North Carolina. Much of their training is highly classified. Delta Force Soldiers were the same Combat uniform of any other Soldier, but they wear no insignia or other Unit identification. Traditionally, Delta Force Members are allowed to have facial hair and non-military haircuts. This allows them to better “fit into” their often dangerous Regions they must operate it. The Government keeps the identity of Delta Force (as it does with all it’s Special Operations Soldiers), secret from The Public.

Although seldom seen, The Delta Force has a Unit Identification Patch. It is a Red Arrowhead with a Black Combat Fighting Knife centered. A Black Cloth Tab with the wording “Airborne” (in Red) is placed over The Arrowhead. Delta Force has distinguished themselves during The Somalian Civil War and most engagements in Iraq and Afghanistan. 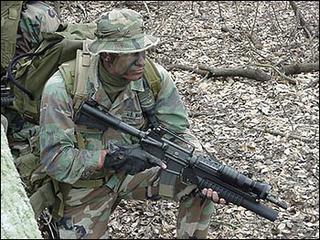