Formed in response to America's involvement in World War I, The 7th Infantry Division was Headquartered at Camp Wheeler, Georgia. Fighting on The Western Front, it was the first US Army Unit to be exposed to Imperial German Chemical attacks. During The Battle of Saint-Mihiel, France - they turned back repeated German charges. Low on ammunition, they relied on the Infantryman's basic weapon - The Bayonet. This led to the Division nickname of "The Bayonet Division". In it's relative short deployment in Europe, The 7th lost close to 3,000 casualties. They were deactivated upon return to The US after The War.

Reactivated for World War II, The 7th was based in Ft. Ord, California. The Division served mostly in The Pacific Theater of War against Japan. Part of The Army's "Island Hopping" campaigns from 1943 to 1945, they again fought with Valor particularly during The Battle of Chichagof Harbor (in The Aleutian Islands). Faced by repeated Japanese "Bonzai" charges, the Division lost 600 killed, but inflicted 1,300 Japanese casualties of their own. The 7th had 3 Medal of Honor winners, and was awarded some 6,000 combat Valor Medals during The War.

Deployed to Korea in the 1950s, they supported The Marine landings at Inchon, suffering thousands of casualties. They were instrumental at The Battle of Heartbreak Ridge (1952), when they stopped repeated Communist advances, suffering 2,000 killed. It was at this engagement that they were renamed "The Black Widows", for  their "deadly and swift attacks". The 7th would remain in South Korea as part of America's Peacekeeping Mission towards South Korea.

Deployed back to America in 1971 (Ft. Ord), they did not participate in The Vietnam Conflict. They were later deployed to The Middle East several times in the 1990s. Scheduled to be deactivated, a "Rapid Response Force" was created instead. Ranging from 250 to 500 men, they are currently stationed at Ft. Lewis, Washington State, they serve in that capacity still. The 7th Patch is a circular device, entirely Red in color. Bordered in Black, the center bears a large inverted double Triangle in Black. This symbol resembled the spotting on the bottom of the Arachnid known as The Black Widow. The Division Motto is "Swift, Silent and Deadly". 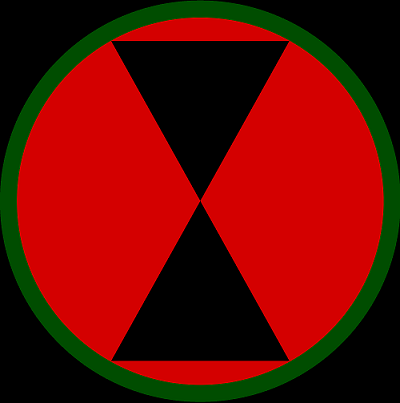