The US manufactured AIM-95 ''Agile'' was an air to air defensive/offensive Missile. Developed for The US Navy in 1967, The AIM-95 was envisioned as an effective SAM (Surface to Air Missile) ''Buster''. Such Batteries were a common threat over North Vietnam to Heavy Bomber Flights. The AIM-95 was a lightweight alternative device to counter them. Roughly 12-feet long with a 8-inch diameter, The AIM-95 was a solid fuel propelled Missile. Weighing close to 200-pounds, they used a HE Warhead. They were underwing mounted (rails) to The F-4 ''Phantom'' and later F-15 ''Eagle'' Fighters. With the rapid development of The AIM-9 ''Sidewinder'' Missile, The ''Agile'' deployment was stopped in their favor. The Soviet Union in the 1970s based some of their MIG Fighter AA Missiles on The AIM-95 Model. 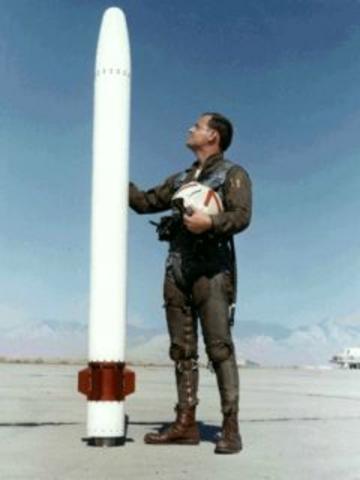