One of America's most successful Air-To Air Missiles, The AIM-9 ''Sidewinder” was first deployed in 1956. Both it and it's variants are some of the most popular Air Defense Missiles in The World. The “Sidewinder'' (named for the lethal Reptile), weighs 188-pounds and is 10-feet long. Some AIM-9 Missiles were also (and are) incorporated in many MObile Air Defense systems as well. The first deployed were again with The US Army in Vietnam. The Rocket was a solid fuel propellant capable of giving The AIM-9 a 22-mile radius at Mach 2.5. The AIM-4 carried a shaped, 20-pound Warhead. The “Sidewinder” was adopted by both US Air Force and Navy. 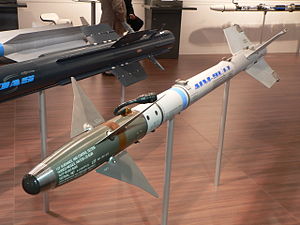