Designed in 1965, The AIM-68 ''Big Q'' was an American Air to Air Missile destined to be built by The US Air Force Weapons Laboratory. It seen as a logical replacement to The AIR-2 ''Genie'' Missile. This was the first deployed tactical Nuclear Air to Air Missile used by The USAF. Named for The Ancient Aztec God ''Quetzalcoati'', The AIM-68 was intended to be 500-pounds. It was to be 10-feet long with a 13-inch diameter. The ''Big Q'' was to support a W30 Nuclear warhead, capable of a .05 Kiloton blast radius. This was ideal for it's intended use again Soviet Medium and Long Range Bombers.

Solid fuel propellant was to be used in the single staged weapon, which would have achieved an airspeed of Mach 4. It;s operational range was rated at 40-miles. A variety of Fighter-Interceptors would have been able to support The AIM-68, including The F-101, 102, 106 and F-4 aircraft. The overall weight was a problem with the Model (Prototype) built. Despite re-designs, The USAF discontinued ''Big Q'' in 1966. 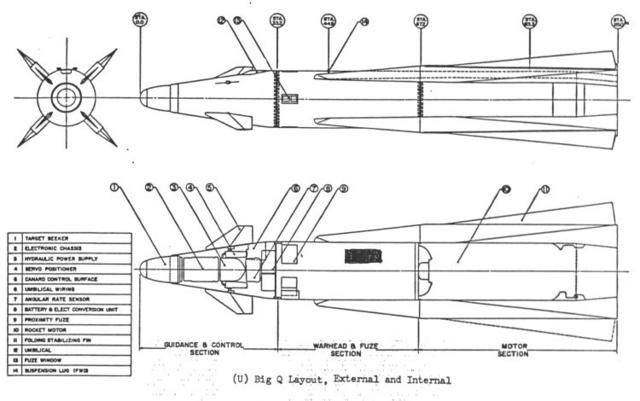