The uniqueness and later infamy that is attached to The 3rd Colorado Cavalry Regiment, while not perhaps well known, is nonetheless a crucial component to the ''true story'' of that period of American History known as The Indian Wars. It was not until The Massacre at Wounded Knee (South Dakota, 1890), that a US Army Unit committed such ''war atrocity''.

The uniqueness of The Regiment was born out of The American Civil War (1861-1865). Many thousands of Volunteers moved their way from States and Territories – with the goal of enlisting in The Federal Army to fight in The War (in the beginning). Due to this, and the re-deployment of many ''Regular Army'' Units (mostly Cavalry), The Western Frontier was largely ''open'' to a series of renewed conflicts with Native Americans. Raids, engagements and the destruction of many Frontier Forts (left abandoned), were rampant.

As such many Territories (future States), recruited any Volunteers into State Militias, used to fill gaps in overall military strengths. Many of these were ''pressed into'' Federal Service for a specific period of time (termed enlistments). Many felt, it was safer to ''fight The Indian'' than ''The Rebel''. As such, Regiments such as The 3rd Colorado Cavalry was formed. Raised in 1864 (Denver, Colorado) – The 3rd numbered an impressive 800 Officers and Men. All signed 90-day enlistments. A 10-day ''mustering out'' Period was added, making them ''100 dayers''. Although equipped and uniformed as a US Cavalry Regiment, The 3rd received little to no formal military training with discipline ''quite poor''.

Before the term of their enlisted ended, The ''Bloodless Third'' (as they were known by other Regiments, due to their lack of military combat experience), they were deployed to Fort Riley, Kansas. They were assigned under command of Colonel John Chivington. Chivington, a political office activist and open ''Indian Hater'', brought up the level of training, for a purpose. He planned an attack on local Cheyenne Tribes – of which The 3rd was seen as part (before they left The Army).

On November 29, 1864, (700) Members of The 3rd (along with 125 other support personnel), headed out to The Sand Creek Indian Reservation. They were supposed to herd The Native Americans back to Ft. Riley and disarm them. What transpired was The Sand Creek Massacre. Scouts assured Chivington that ''hundreds'' (as many as 300-500) Hostiles were present. When The Regiment charged The Village, they fought (according to Native Americans sources), was 75 ''Old Men and Young Boys'' to fight – coupled with several hundred ''Women and Children''.

The Regiment slaughtered all to a person, in a bloodlust seldom seen perpetrated by American Soldiers up to that point. Chivington claimed 500 killed , but these numbers are probably exaggerated. Native American sources too, may have raised the number of casualties. Most Historians are closer to agree with a figure of 175 to 200. The brutality of The 3rd stretched to the taking of ''trophies'' as well. Head, hands, feet, etc. were gleefully taken – with many being ''displayed for years''. They were hence known as ''The Bloody Third''.

The Regiment (which lost only around 25 Men during it's short and bloody enlistment), was mustered out on December 31, 1864. Later, after The Civil War, The US Government did launch a ''semi-official'' Court of Inquiry, into the actions of Sand Creek. While Colonel Chivington was ''reprimanded'' (in word), but no members of The 3rd Colorado were ever to answer for their barbarity. 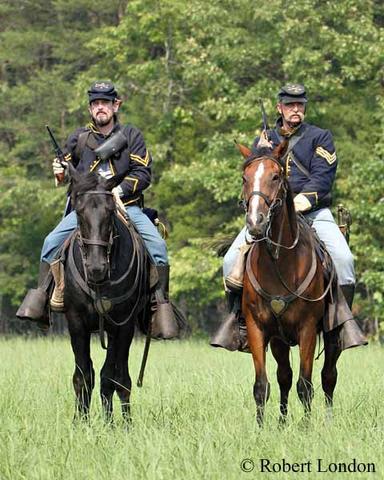