As we have seen, one of the most deployed Artillery Pieces during The American Civil War of 1861-1865, was The 12-Pound “Napoleon” Field Piece. So named for it’s French Regional designs in the 1850s and the weight of it’s standard 12-pound Shot, it was perhaps one of France’s most exported weapons from the 1850s into the early 1870s throughout The World. Most Militaries used them (or variations in kind).

The 3-inch was designed by John Griffen, and was manufactured by The US Ordnance Corps. (US Government). As such, it is often referred to as The US “Ordnance Gun”. The Piece was often confused with The “Parrot” Field and Siege Cannon, which were in use as well.

Widely seen in deployment by both Union and Confederate Forces, another Field Cannon was used – which is often overlooked by some Historians. The US 3-inch Rifled Field Gun was a highly mobile and light Field Gun used primarily by The Union Army, as so did The Confederates (when captured). Seen as a replacement for the older 1850s Model “Napoleon”, these small Cannon also were among the first Rifled Barrels deployed by The Union Army.

Often used in Infantry Support scenarios, The 3-inch Gun was made on cast iron, which caused several issues however with use. Repeated firings often caused the Barrel to go “brittle” and increased the probability of explosion of the Tube. Notwithstanding, The 3-inch Rifled Gun was deadly accurate at ranges of under 1-Mile. It’s rifling made it superior to The Napoleon (which naturally was deployed in Batteries of 6 to 8 and in “Saturation” firing situations).

Easily deployed by 1 Horseman if needed, The 3-inch Gun weighed roughly 500-pounds. Served by either a normal Crew of 4, it could also be fired only by 2. The 3-inch Gun was best known to Military History as being the primary Field Piece used by Union General William T. Sherman’s Forces during The Atlanta Campaign (again chosen for ease of transport and deployment). 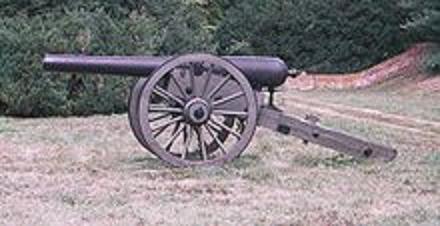