The famed “Iron Brigade” was formed in 1861 in response to US President Lincoln's request for 75,000 Volunteers to “put down The Rebellion” (Civil War). Consisting primarily of Wisconsin Units, several Michigan Units were later added. As “Mid-Westerners” these soldiers had a reputation for being “tough and hard as iron”. Hence, their nickname of “The Iron Brigade”. Known for their iconic symbolism of wearing the outdated 1858 Hardee Dress Hat (that most Units quickly replaced with The Kepi) – The Brigade refused to surrender them. Assigned to The 1st Corps. - under Gen. George McCellan, The Iron Brigade would distinguish itself time and time again. Their most heroic time came first at The Battle of Fredricksburg (1862) and later at Gettysburg (1863). At Fredricksburg, The Brigade was given the task of taking Confederate positions along the walled entrenchments of Marye's Heights. At least 4 other “Assault Waves” of Union soldiers were mowed down by the withering fire. The “Black Hats” of The Iron Brigade charged and charged. Their heroism was “cheered” by the defending Confederates. Later, at the cauldron known as Gettysburg, The Iron Brigade lost 61% casualties. Almost completely decimated, the survivors were reconstituted into a smaller Brigade. This Iron Brigade would continue their fight up to the last battle of The War -Appomattox Court House, Virginia (1865). 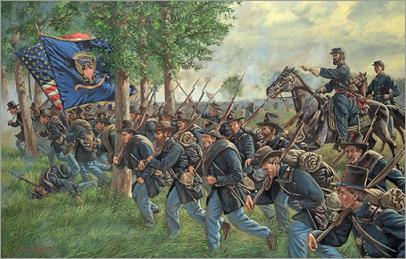