Composing of (12) Companies of Horse, The 9th Pennsylvania was raised in and around Harrisburg, Pennsylvania for service with The Union Army during The American Civil War of 1861-65. Unlike many early Civil War Units, The 9th was gifted with an abundance of Military experience among it's Officers. Part of The Army of Kentucky, The Regiment fought against Confederate Raiders John Hunt Morgan and others, with their attempts to invade The North via The Ohio Valley. Later, The Regiment would fight with General Sherman in his Campaign in Atlanta (1864).

The 9th was present when the last official Confederate Land Force under General Joe Johnson surrendered in North Carolina in 1865. The Regiment is credited with mostly victories when they encountered (fought) Confederate Forces throughout The War. They also counted only a loss of 250 Officers and Men during their War Service. 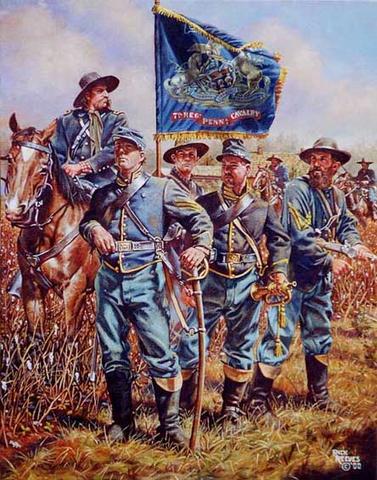