Formed in 1861, The 9th Massachusetts Infantry Regiment or ''Fighting Ninth'' as they were known, was recruited from mostly Irish Volunteers to The Union Army at the start of The American Civil War. Composed of (8) Companies, The 9th was also honored by being reviewed by US President Abraham Lincoln when they arrived in Washington DC in 1861.

The ''Fighting Ninth'' fought in (15) major Civil war battles under The Army of The Potomac. They also were one of the few Union Regiments to used the smoothboore .69 Caliber Musket for almost (2) years, before being given rifled muskets. The Regiment had a reputation for not withdrawing under fire, which often gave them high casualties.

Present at Gettysburg (1863), Then 9th held Big Round Top against repeated Confederate assaults. They would continue fighting until after the infamous Battle of The Wilderness (1864). After the battle, The 9ths enlistment term ended and all surviving soldiers, declined to re-enlist. They were mustered out in Boston, Massachusetts. It was widely believed that excessive casualties and dissatisfaction with the course of The War was a major factor in their decision. 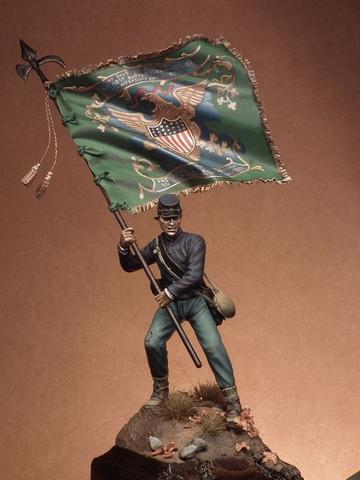