Also known as ''Gosline's Zouaves'', The 95th Pennsylvania Infantry Regiment was raised in Philadelphia, Pennsylvania in 1861. Mustered in with (10) Companies, The Regiment was yet another of The Union Armies ''Zouave Regiments'' that served in The American Civil War. Serving with The Army of The Potomac, The 95th saw action in the majority of American Civil War Battles. During The Battle of Seven Pines (Virginia, 1862), The Regiment took on Wheat's Confederate Louisiana Tiger Zouave Regiment, in an epic Infantry charge which yielded the death of their Commander.

The Regiment suffered high casualties at Gettysburg in 1863, losing 40% of it's number. The Regiment would end The War with an unusual number of killed and mortally wound Field Officers (many of which ''led from The Front'', rather than the relative ''safety'' of The Rear. The 95th also saw (4) Medals of Honor awarded. Mustered out in 1865, The Regiment listed 400 killed in battle and 300 more seriously to moderately wounded in battle. 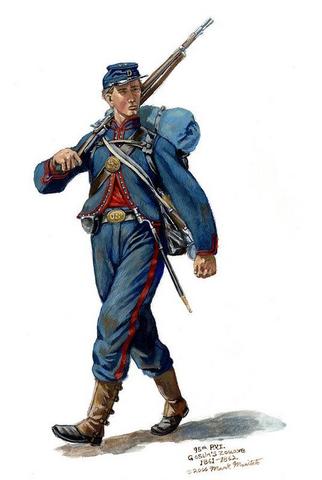