Formed in 1862 from Citizens of Grand Rapids, Michigan – The 7th Michigan Cavalry was part of The Michigan Brigade of Volunteers, who fought in The American Civil War. Originally, (5) Troops were formed totaling 500 Officers and Men. The Regiment was assigned to The Army of The Potomac. It was commanded for a period by famed Cavalry Commander (and Michigan Son) – George Armstrong Custer.

The Regiment first fought at Gettysburg (1863) and went on to participate in (6) major engagements. They mostly saw action in the campaigns to capture The Confederate Capital of Richmond. The 7th also fought in The Battle of Yellow Tavern (Virginia, 1864) – which saw the death of famed Confederate Cavalier General JEB Stuart. They would also go on to fight in the last major Cavalry battle of The Ear at Five Forks – and were present at Appomattox Court House.

The 7th Michigan was mustered out of it's Civil war Service in 1865, but elements would be reformed into another famed Unit – The 7th US Cavalry. The 7th Cavalry would again be commanded by Custer and go into History at the infamous Massacre at The Little Big Horn in 1876. It's linage is still active with the current 7th US (Air Mobile) Cavalry. 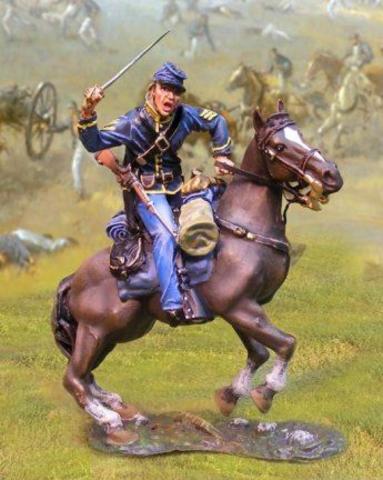