The 72nd Pennsylvania Infantry Regiment was formed to fight in The Union Army in The American Civil War of 1861-1865. The recruits were mostly Philadelphia Firemen and they donned the colorful and popular French Zouave Uniform for their appearance. (4) Companies were formed.

The 72nd fought (7) major Civil War battles, losing over half their number at Antietam (1862), but with their appearance at The Battle of Gettysburg (1863) being their most memorable. The 72nd was located close to The Center of The Federal Line and bore a portion of Confederate General George Pickett's assault on July 3rd. They held The Line and helped repulse The Charge.

They finished their wartime serve by being present at the start of The Siege of Petersburg (Virginia). When their enlistment ended, The 72nd was mustered out of Federal Service. The Regiment ended with 65% of their numbers lost to combat. 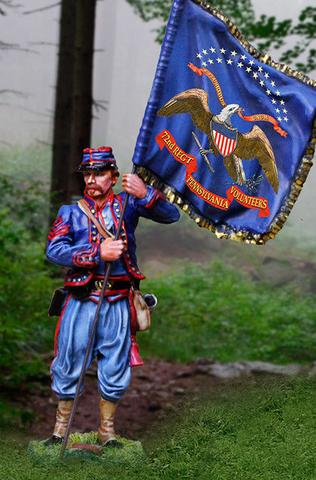