The 6th Pennsylvania Cavalry, also known as ''Rush's Lancers'' - was a Volunteer Cavalry Regiment formed to fight for The Union, during The American Civil War. They were the only Federal Cavalry Unit that briefly used The Austrian Lance as it's primary weapon. These Lances were Ash and typically 9-feet Long. The Regiment used Red Pennons at the spear tip. Recruits came from three Counties outside of The City of Philadelphia. The Regiment had earned honor during The American Revolution as a Volunteer Militia known as The ''City Troop of Cavalry''.

The Regiment wore the standard Federal Army Cavalry Uniform stipulated by Regulation. This was a Dark Blue Shell Jacket with Light Blue (Kersey) Trousers. Yellow was the trim used to identify them as Cavalry. Numbering 750 Officers and Men, The 6th would lose their Lances in favor of Carbines in time for The Battle of Gettysburg (1863). It was at The Battle of Brandy Station (Virginia, 1864) that 500 Men charged Confederate Artillery positions in a futile attempt to capture the guns. Only 100 would survive a charge that rivaled The Charge of The Light Brigade during The Crimean War.

Reformed, The 6th was consolidated with several other depleted Cavalry Regiments, to form The 2nd Pennsylvania Provisional Cavalry. They would go on to continue fighting in The War and were present at the surrender of The Confederate Army of Northern Virginia at Appomattox Court House in 1865. Although mustered out in 1865, the linage of The 6th continues today as The 104th Cavalry, Pennsylvania National Guard. 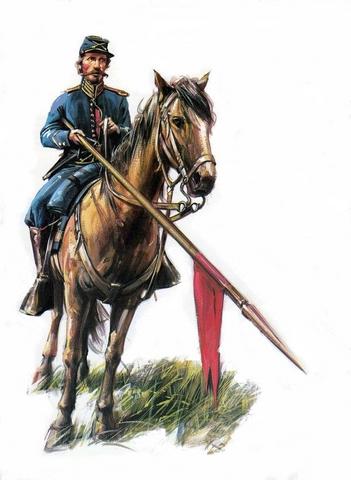