Formed in 1861, at the start of The American Civil War - this was a volunteer infantry unit consisting of New York citizens. They were equipped with the standard infantry rifle and related accoutrements. The 5th New York popularized the "Zouave" French uniform (which was very popular at the time). They participated in 8 major civil war battles. Their most famous moment was at The 2nd Battle of Manassas (Virginia, 1862). Consisting of some 550 men, they stood their ground against an advancing Confederate Brigade (all the while under intense Rebel artillery shot).

The Unit did not retreat or falter. They were outnumbered 3 to 1. This gave The 5th the distinction of having the most casualties of any single unit (up to that time). All Officers (save 1) and the entire Color Guard were killed. The unit was reconstituted and sent to fight in other "historic" engagements. By this time however, the flash of the Zouave uniform had been replaced by the traditional Union infantry uniform. Again suffering massive casualties at The Battle of Chancellorsville (Virginia, 1863) - the unit was not reformed and those few survivors were merged into other units. 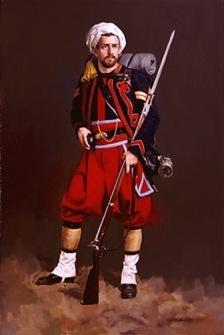