The 55th New York Infantry Regiment was a Volunteer Unit formed in New York (Staten Island), in 1861, in support of The Union War effort during The American Civil War. The unit was unique in that all of it's recruits were French immigrants. The Regiment formed (8) Companies of roughly 700 Officers and Men.

The Regiment was used to Garrison many of the Fortifications built around The District of Columbia (Washington). They saw Combat in The Peninsular Campaign of 1862, to include The Battles of Seven Pines (Virginia), The Siege of Yorktown (Virginia) and the epic Artillery engagement at Malvern Hill (Virginia). The last major battle fought by The 55th Infantry was at Fredericksburg (Virginia).

Sent back to Garrison duties at Washington, The Regiment was eventually merged with other New York Units due to casualties to form (3) Companies of The 38th New York Infantry (thus losing it's Unit identifier).

The 55th (although French), did not follow the traditional and popular Zouave pattern of Uniforms. They did adopt the color scheme, Light Blue Frocks (Coats). Kepi's were Red in color. While they carried The National Colors (Stars and Stripes), their Regimental Colors were copied from The French First Republic Flags used by former French Dictator, Emperor Napoleon Bonaparte. The Colors were The French Tricolor of Blue, Red and White. Centered on The White Stripe, was The Regimental Number Identifier '”55'' in Red (surrounded by a Green Laurel Wreath). On The Blue Stripe was featured “NY” for The State of New York. The Red Stripe bore the letters ''SM'' for State Militia. Both Blue and Red Stripes also shared the phrase'' Lafayette Guard'' in reference to French American Revolutionary War Hero, The Marquis d' Lafayette. 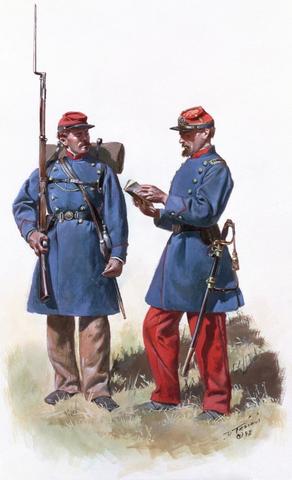