Formed in 1862 during The American Civil War, The 54th Massachusetts was formed in response to US President Abraham Lincoln's passing of The Emancipation Proclamation. This document gave freedom to slaves within The South (at war with The North). It also gave certain rights to already freed and born-free African-Americans in The North. This Unit is considered the first all African-American formation raised to serve in the US Army. They were uniformed and equipped with the standard infantryman's weapons of the day. They participated in several moderate skirmishes in Northeastern Georgia and South Carolina. The 54ths main claim to fame was their assault against the Confederate garrison at Fort Wagner (South Carolina/US). Also called "Battery Wagner", the Fort was part of South Carolina's coastal defense system. It also boasted the reputation as being impenetrable to attack from land. 9 separate attacks on the Fort (landward), had been attempted (with heavy casualties to the assaulting force).

The 54th were given the opportunity to try. Charging through wet sand, breastworks - all the while under withering rifle and artillery fire, the 54th actually made it to the topmost parapets of Fort Wagner. Weakened by loss of men, the Unit had to withdraw. The Fort kept it's reputation. The 54th suffered over 50% casualties in the engagement. The Unit also has the distinction of having the first African-American US Congressional Medal of Honor winner (the high decoration awarded to a soldier by The Government), awarded to the Unit's Color Sergeant - for remaining on the parapet with the Unit colors, urging on his men. 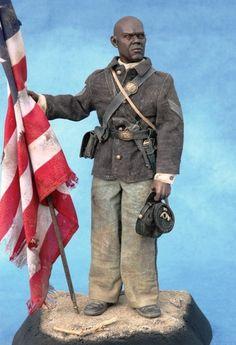