A Volunteer Cavalry Unit of The Union Army during The American Civil War – The 15th Kansas Cavalry was formed late in The War (1863). Mustered in at Fort Leavenworth, Kansas – it's primary Mission to was to  monitor Native American activities in those Regions leading West from Kansas and Missouri. This freed up experienced soldiers for The Union Army in The East. Nonetheless, The 15th Kansas would still participate in (9) Minor and (1) Major Western Theater engagement during The War. Mustered in with 250-Men, divided into (7) Mounted Companies – some of these were detached to other American Western Forts. The remaining would be eventually called in support of a 30,000-Man Federal Army to repel a Confederate advance into Kansas, at The Battle of Westport (1864).

The lost a total of 100-Men during it's Service, with actual battle casualties listed as 77. The remainder lost to disease. The 15th was mustered out in 1865, after The War. Unlike most US Cavalry Regiments, The 15th did not use the traditional ''Swallow-Tail'' Guidon. Rather, they used a miniature version of a standard Infantry Regimental Flag. This, as previously discussed was a Blue Field upon which was sewn a full color representation of a US Eagle. A Banneroll was placed on The Flag to identify The 15th. 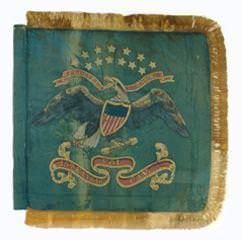