The US 150th New York Infantry Regiment was raised in 1862 to fight in The American Civil War. 1,000 Officers and Men formed (10) Companies. The Regiment was ''luckier'' than most Union Army Units, for it had a West Point Academy Graduate and prior service Officers to lead it. The Regiment was assigned to The Army of The Potomac and fought in (11) major Civil War Battles. At the epic Battle of Gettysburg, The 140th was assigned to defend the lower (ground) portion of Little Round Top (the top of which was held by The 20th Maine Infantry). They held against repeated charges made by The 4th and 5th Texas Brigade under General JB Hood. Over 200 casualties from The 140th were recorded. Later The 140th was present at The Battle of The Wilderness (Virginia). The Regiment suffered horribly (as most did), losing nearly 400 soldiers to the burning fires caused by musket and cannon fire. Reports cite that most of their losses happened within a 30-minute period. One Member of The Regiment won The Medal of Honor for actions at The Wilderness.

Later reformed, The 140th would continue fighting towards The Confederate Capital of Richmond. They were present when General Lee surrendered his Confederate Army at Appomattox Court House in 1865. Only 245 soldiers were mustered out of service. Sadly, the 140th Infantry also had 77 of their number captured and held by Rebels at the infamous Andersonville Prison (Georgia). None of these men survived their imprisonment. Oddly, The 140th Infantry started out with a standard issue Union Army Frock Coat and trousers. After Gettysburg, They switched to the more flamboyant Zouave Uniform that was popular at the start of The War. They would retain this appearance until the end. 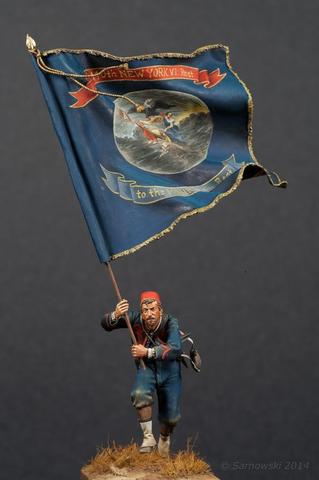