Established in 1862 for service in The Union Army during The American Civil War as The Zouaves de Afrique (after their very colorful French styled Zouave Uniforms), The Regiment was actually a small Company of roughly 50-Officers and Men. They so distinguished themselves at The Battle of Antietam (Maryland, 1862), that they were recalled back to Pennsylvania and reformed as a full Regiment, re-identified as The 114th Pennsylvania Infantry Regiment. Roughly 1,800 Officer and Men formed (2) Brigades in The Army of The Potomac.

At Fredericksburg (December, 1862), The Regiment participated in the numerous charges against fortified Confederate Positions on Marye's Heights. When The Regiment appeared to falter, the Regiment's Colonel seized The Regimental Colors and rallied his Troops to complete their Charge (a failure nonetheless). The Colonel, Charles Collis would receive The Congressional Medal of Honor for this action. Later at the epic Battle of Gettysburg (1863), the 114th would valiantly hold their positions at The Peach Orchard – suffering 30% casualties. The Regiment would continue to fight in the last major battles of The Civil War. They like other American Zouave Units in The Union Army, refused to trade out their colorful and trademark uniforms for regulation Federal Blues.

The 114th was also noted for having one of the best Marching Bands in The Union Army, and as such were picked to be one of the lead Regiments at the great March of The Grand Army of The Republic, which took place to celebrate the end of The War (in Washington DC, 1865). The Regiment also has the honor of having the most Battlefield Markers present on (15) different Civil War Memorial Battlefields, as well as being the most decorated Civil War Unit from Pennsylvania. 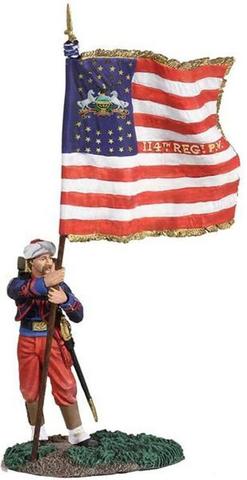