Also known as The ''National Zouaves'' and ''McChesney Zouaves'' (after their Commander), The 10th New York was an Infantry Regiment formed to fight in The American Civil War of 1861-1865. Totaling (10) Regiments of Infantry Volunteers, they were recruited entirely from The City of New York (NY State) in 1861. The Regiment was assigned to The Army of The Potomac and fought in (29) major Civil War Battles throughout Virginia. They fought at Fredericksburg, Chnacellorsville and the epic Battle of Gettysburg in 1863, where they formed part of The Line known as ''The High Water Mark'' – which repulsed a 5,000 Man Rebel Infantry charge. The Regiment was present when Confederate General Robert E. Lee surrendered his Army to Federal General US Grant at Appomattox Court House, Virginia in 1865. The Regiment, for all it's fighting – fared somewhat well with regards to casualties. It lost only 130 Officers and Men in combat when mustered out.

As a Zouave Regiment, The 10th New York modeled their uniforms after the colorful French Infantry Unit on the 19th Century, with some variants. They did not adopt the billowing Pantaloons, but chose a Federal Blue Trouser. They kept the Shell coat with Red Trim embellishments. They also favored a Light Blue Shirtee, also trimmed in Red. They retained The Kepi Cap as well. The 10th New York Regimental color was as most New York Volunteers, which was a Blue Field with The State Seal present. No Battle Honors were placed. 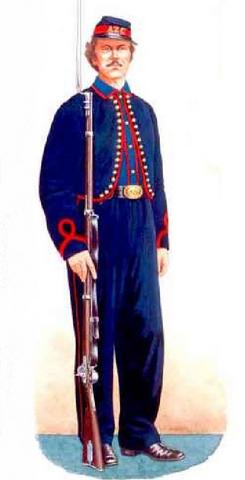