Uniform of The Viet Cong

Iconic and still recognized today, the Irregular Guerilla Forces of The Peoples Liberation Army Front  (aka Viet Cong), were noted for their improvised warfare and ability to blend into their environment very effectively. There somewhat simply Uniform no doubt played a large part in their ability to do this. The traditional “Commoner” dress was a Unisex garment known as The Ao Baba. A simple lightweight Shirt/Coat and Trousers, the material was very cheap and light. Most Shirts had either no front pockets or between 1 and 4. Trousers were cinched at the front with rope or twine. Traditionally, The Ao Baba was Black. This was effective camouflage in the often “Triple Canopy” botanical system that was common in Vietnam. discussed, The Non La or Jungle Patrol Soft Hats were used.

T-shirts were also used as needed (but mist likely not). Viet Cong also typically carried a small towel/rag, called a Khan Ran. Possibly derived from a similar garment accessory seen in use by Cambodia’s Khmer Rouge, these scarfs were checkered. They were worn around the neck and were traditionally Black and White (although other colors were known). The Viet Cong did not wear boots. At first, they wore a type of “Boat Deck” Shoe. Although perhaps impractical for Modern Combat, they aided on their “legendary” Stealth abilities. Later, they adopted the even more iconic  Dep Lop Sandal. The Viet Cong normally used all cloth or captured Web belting, to carry their personal combat equipment. This assisted them in their quiet movements through The Jungle. The Viet Cong Uniform did not change throughout it’s deployment. 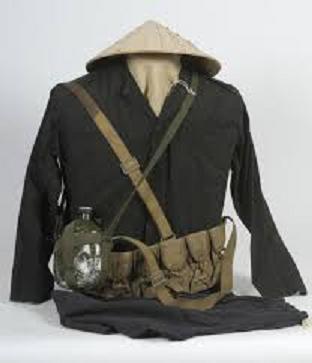