Uniform of The North Vietnamese Infantry

As previously stated, The Peoples Army of North Vietnam,  was the primary Military Force of The Socialist Government of The North. Split from The South over perceived Election manipulation, The North waged War against first The Army of The Republic of Vietnam and then their Allies – The United States. The North patterned their Military appearance after their former Enemy, The French  (The Indo-Chinese War).

The Standard issued uniform was a Tan (Khaki), two piece type. By 1968, most of these were liberally mixed with Olive Drab Green Fatigues. Trousers were held by both belt and or suspenders. Coats were both of twin and four pocket design. Sometimes, Brass buttons were used. Outer gear was limited to leather “Sam Browne” Belts, with various pieces of carriers for different equipment  (which was mostly sparse). Insignia,  when used – was simple and based largely on The Soviet System (and worn on front facing collars or epaulets – in Officers cases). The universal, 5-pointed Gold Star (often in a Red background), was worn on the Uniform. This was not only symbolic of The North Vietnamese National Emblem, but synonymous with most Communist Countries as an emblem of "Political Indoctrination"

The previously mentioned Pith or Model 56 Helmet topped off their appearance. Undershirts were originally Tan, but White and even Green were known to exist. Tie were known, but seldom if ever – in The Field. Foot gear was based on a “Bootie and Brogan” design Regionally manufactured. It was not an uncommon practice for NVA Soldiers to wear open toed Tongs Shoes (the current equivalent of The “Flip Flop” as well case captured US Military Boots. The basic style of The NVA Uniform remained unchanged until the 1980s, when they adopted an appearance consistent with that of the current People’s Republic of Chinese Army. 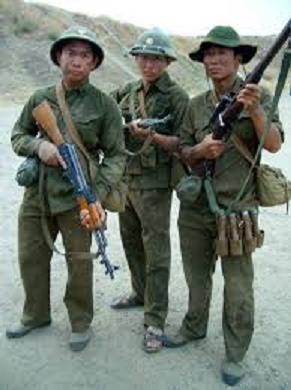