An Ancient Flag that was seen associated in The Northern Regions of Ireland, before English Occupation, The Ulster Flag originated in the 11th Century. It is speculated that The Flag was associated with the Dynastic Reign of The Irish O’Neill Clan. The Flag featured Symbolism that dated back to the 5th Century, in particular, a Red Hand, palm facing outwards with all Digits pointing Heavenward. Known as The Dextra Dei (or “Hand of God”), this was Centered on a Field of Yellow. The Hand was mounted on a White Shield. A Red Cross of St. George ran from Hoist to Fly, creating a Quartering. The Flag represented Ireland for several hundred years, until British Occupation was firmly established in The North, with The City of Ulster as it’s seat of power. Replaced by The Cross of St. Patrick Flag in the 14th Century  (and briefly by The British Union Jack) – a variation of The Ulster Flag was created in 1952. Today, the Flag is associated with Sporting and Nationalist Events. 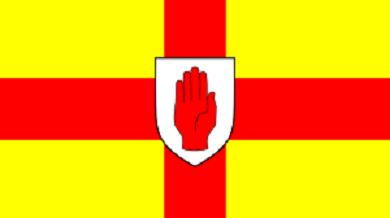