Actually, the Ancient Roman equivalent to a sock! Most Roman's actually wore a type of sock to protect the bare foot (due to the style of footwear used). In the Roman Army, heavy woolen socks were used with the Caligae Boots (heavy enclosed footwear). The Udone was worn in both summer and winter time and served to not only keep the foot warm (winter), but to cushion the foot for the many hundreds of miles an average Roman Legionaries had to march (often in a day!) The Udone was actually a large squared piece which was not shaped as a foot (as with modern socks). The Udone was placed over the foot and wrapped at an angle – until the foot was covered up to the upper ankle. 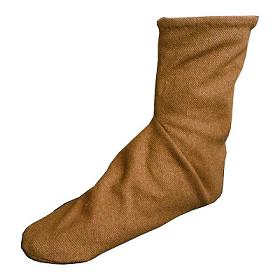