Turret Ships were the Naval warfare innovation that replaced the need for “Broadside” firing against an enemy vessel. These 19th Century designs were rotating or revolving metal “boxes” or Turrets, that were built onto a ship's deck. The Turret placed a series of 2 to 4 guns on the Main Deck and provided protection to the Gunner's. Dalhgren, Columbiads and Armstrong Gun systems all incorporated gear operated track systems (human and steam powered) to give the guns semi or complete rotation. Unlike The Barbette (used by most Navies), The Turret was completely enclosed. An example of an early Turret Ship is from The Crimean War of the 1850s. A British Naval Officer constructed a raft with a protective “cupola” and several 6-pound field pieces. He and his “crew” successfully bombarded a Russian Town. This idea would lead to one of the first Turret Ships, The HMS “Prince Albert” - built in 1862. With the coming of The American Civil War, Swedish designs for Ironclads would include American ideas on rotating Turrets (which would turn on 2 10-inch guns). The USS “Monitor” was the first US warship to be considered a Turret Ship. Continued experimentation would lead to the first “Mastless” warship to feature Turret components exclusively in 1871 – The HMS “Thunderer”. 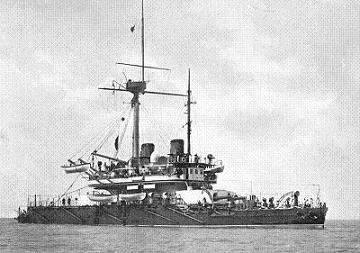