The most recognized form of footwear worn during the early and mid-Medieval Era, The Turnshoe was so named for the manufacturing process by which they were made. Designed of either cow, pig or in some cases - goat hide, Turnshoes were made inside out, then turned outward. This not only "hid" the obvious single connective stitching, but also provided a "vamp" - or seal. Turnshoes were designed to cinch at the top with a leather strap or lace. A heavier bottom was accomplished by a thicker piece of hide. Moisture was impeded by being absorbed by the material. Unfortunately, wet shoes took time to dry. Some Regions used various forms of primitive waterproofing as a solution. By the early 16th Century, welded soles were developed. The Turnshoe became obsolete. 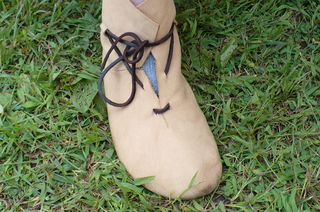