Popular among Venetian and Italian Men as a form of headwear, the so called "Turban Hat", was developed in the 16th Century. Made of a one-piece rolled felt or hand pressed linen, they were normally in a variety of colors. The Turban Hat was hand sewn or looms produced. They could be decorated with Ostrich Plume or related feathers. They could be embroidered or patterned. The design was popularized by the standard wear of many Middle Eastern Coastal Countries, when "Oriental" Fashion was popularized by Venetian and Italian Merchants and Explorers. It was not much seen after the 18th Century. 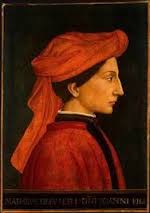